Original Post: Modern technology is frequently bringing more gadgets to the market that are every protective parent’s dream. This next one is no different, and boy does it pack in some high-tech features to keep your little one safe.

It’s called the “Carkoon,” which is essentially a car seat with a built-in airbag that immediately will cocoon your baby in a safe, cushioned package in the event of a crash. To be more precise, it will envelop the baby within 50 milliseconds upon impact in Kevlar, a material often used in body armor with a strength-to-weight ratio that is five times stronger than steel.

Developed by the British company Cool Technologies, the Carkoon is fireproof and holds 20 minutes of air supply. It also sends a GPS location to emergency services when it senses deployment from an impact.

Here’s what Carkoon has to say about its technology:

Carkoon offers the very best protection for your child. Featuring a side impact protection system, that actually absorbs impact forces, you can be sure your child has the best possible protection here. Our airbag is manufactured using high quality fire retardant Kevlar material, ensuring that, in the unlikely event of an accident involving fire – your child is protected.

The Daily Mail explains the car seat’s airbag remains rigid to allow objects flying in the vehicle to bounce right off of it. It reports Carkoon inventor Jullian Preston-Powers saying “we have even bounced a brick off of it.”

So what inspired the idea for this even more protective carseat? The Daily Mail explains:

[Preston-Powers] came up with the idea after speaking to a Sussex fireman whose hands were badly burned when he tried to rescue a baby from a burning car.

Sadly, the fireman was unsuccessful and the baby died. 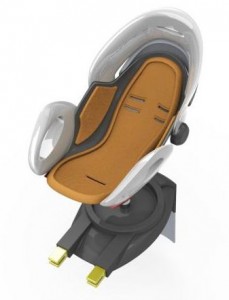 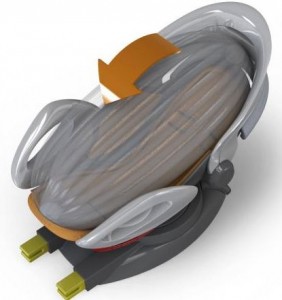 Although the cars eat is generally rear facing, touted as the safest direction to seat young ones, it does have a swivel function to make it easy for parents to buckle children in and then turn them to the correct position. It also features a quick release handle to make it easy to remove the baby from the car in an emergency situation.

The Daily Mail reports the Carkoon prototype recently underwent testing in Britain’s Transport Research Laboratory, but before it’s market ready, the company will need to prove the airbag does not pose with any risks to the baby or interfere with rescue.