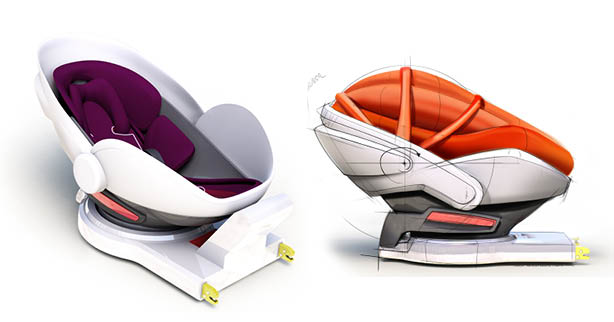 Original Article: British engineers have unveiled a prototype of a car seat that cocoons your baby or child in a protective shell in the event of an accident.

Called Carkoon, it is a rear-facing car seat that features a protective shell to shield the little passenger from fire and provide up to 20 minutes of air. Using the latest in airbag technology it inflates on impact. The airbag, when inflated, is meant to be rigid enough to protect the child from any objects that may be dislodged in the crash. Inventor Julian Preston-Powers claims this is vital, as a stray water bottle or satnav could kill in a 30mph crash, reports The Daily Mail.

The seat is also fitted with GPS which alerts the emergency services of your location in the event of an accident. The idea is they could then prioritise the call as they know the accident involves a baby.

The car seat can be swivelled round to face the door, this is said to be for easy release during an accident and to make lifting your child in and out easier.

Cool Technologies, the name behind the seat, will need to show that the car seat doesn’t pose any risk to the child or hinder the child’s rescue before it goes to market. If Cool Technologies can do this, the Carkoon could be on sale as early as next year, for around £499.

So what do you think of the ‘Carkoon’?