Original Article: It’s already clear that many of the baby products marketed to parents as essential are absurd. But, what happens when a very necessary purchase is made to look ridiculous, in the name of safety?

Welcome to the age of extreme baby-proofing. Last week, U.K. inventor Jullian Preston-Powers unveiled the Carkoon® –- a car seat that’s positioned to be “among the safest on the market.” Instead of letting baby sit comfortably in a plush chair, she or he is covered by a protective shell, which makes the whole contraption look a little like a spacecraft. 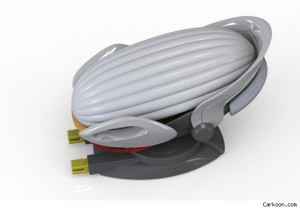 Despite it’s futuristic facade, the £499 seat could be on sale as soon as next year, The Telegraph reports. Its main feature, as demonstrated in a video above, is a fireproof airbag that folds out on impact in less than a tenth of a second that protects the child from debris and flying objects. If the shield has been deployed, an Onstar-esque system automatically notifies emergency services and gives them a location.

Preston-Powers told BBC that airbag technology has protected adults for a long time, but has not been extended to children in the backseat –- until now. “[We’ve] created a device that completely ensconces the child in a fire proof bubble, on impact, that prevents these objects from inside the car from impacting the child’s head or body,” he said. To test the shell’s strength, they’ve even thrown a brick at it, Preston-Powers told the Daily Mail.