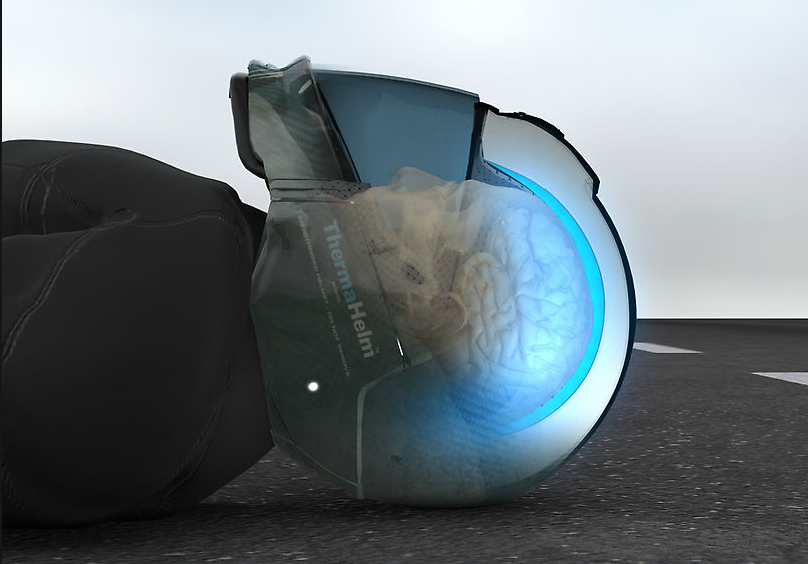 Original Post:  An extraordinary new ‘brain-cooling’ motorcycle helmet could save thousands of lives each year.

Called the ThermaHelm, the incredible piece of equipment comes with an inbuilt device that acts like an instant ice pack after a sudden impact.

By cooling the brain it is thought the carbon fibre helmet can reduce the risk of long-term brain damage and save lives.

The British creators will launch the £299 helmet in May this year.

Inventor and motorcycling enthusiast Jullian Preston-Powers said he has had an incredible response to the new design.

Mr Preston-Powers, 44, said: ‘We’ve had a great reaction. People think it’s a great idea and have said they can’t believe no-one has thought of this before.

‘Companies all over the world are banging down our doors to get hold of it when it’s launched this year.’

Mr Preston-Powers. from Brighton, said he had an ‘eureka’ moment after sustaining an injury during a game of basketball.

He said: ‘I had been playing basketball with a friend and I had smashed my elbow on his head. Someone handed us both ice-packs for our injuries and it was so cold I couldn’t hold it for very long.
So I placed it in my friend’s motorcycle helmet and he accidentally put it on while the pack was inside.

‘He was surprised by how good it felt and that’s when I had that ‘eureka’ moment’.’

After two years of developing the idea at the Sussex Innovation Centre, in Brighton, it is now set to hit the shelves this year.

The helmet contains two lightweight chemical packs, which are built into the helmet lining.

One pack contains water, the other ammonium nitrate. A sudden impact causes the two to mix and trigger a ‘cooling’ reaction.

This reaction lasts up to 45 minutes, stabilising the temperature of the brain and improving the crash victim’s chances of survival.

Mr Preston-Powers said: ‘This is a hugely exciting innovation that has the potential to save thousands of lives around the world every year.’

Development teams are currently looking into to further uses for the ‘brain-cooling’ device.

A £499 version of the ThermaHelm – which includes video cameras, GPS and bluetooth, is in the pipeline for July this year.

Mr Preston-Powers also expects to see the technology included in helmets for the military in the near future.